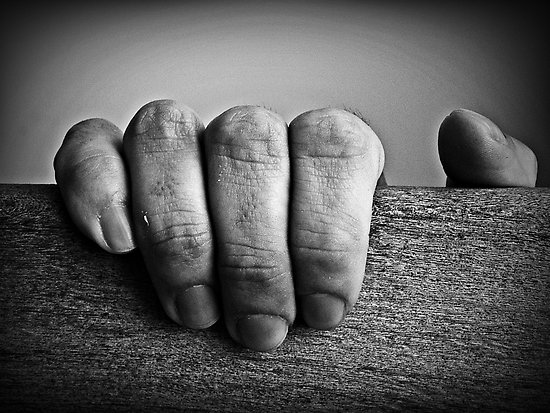 It’s so hard not to give up! We try countless times to succeed but when the door seems shut we just want to ‘call it quits’! It’s far easier to accept defeat than to encourage ourselves to keep trying unsuccessfully. “So what?” we say. “I’ll be ok without it”! But what we’re not realizing is that by surrendering we are relinquishing who we truly are and selling ourselves short!

Most of the time the reason why we say these things is because we’re so frustrated and/or ashamed by our failure to succeed that we subconsciously rather stop trying than make another attempt and suffer defeat. You know the kid who gets embarrassed in school by his friends? He comes home, slams the door and yells “I’M NEVER GOING TO SCHOOL AGAIN!!” That’s pretty much what we’re doing when we file away (for life) our talents, in fear that somebody (not sure who?) will laugh at us if we fall down in the process.

On Rebbi Nachman’s last Shabbos Nachamu in Uman, about two months before he passed away, many chassidim gathered at his meal on Friday night to hear him speak. Although he would usually go to his private room right after kiddish and prepare himself for the meal, instead he sat at the table quietly. Appearing weak and tired he said, “Why did you come to me? I don’t know anything at all! If I had something to say then I understand why you would come here. But I’m a simple peasant. I don’t know anything at all”! He kept on repeating these types of things for awhile until he finally said, “The only thing that’s keeping me alive now is that I was in the Land of Israel”. Slowly he began to expound on that idea until he delivered a long lesson on it (תנינא ע״ח). After the lesson it’s said over that he was ecstatic and instructed the chassidim to sing zemiros and he sang with them, even though he hadn’t sang in recent months due to his illness. Then he spoke to the chassidim the entire meal with tremendous sweetness and encouraged them greatly. Finally, he yelled out from the depths of his heart “Gevalt! Don’t give up on yourselves! There is no reason to ever give up!״

We might not understand the Rebbe’s mysterious simplicity at that time. But in some concealed way, although his mastery of Torah was unparalleled, at that moment in his mind, he really knew nothing at all! But he didn’t give up. He found some way to open himself up and succeeded in saying over beautiful Torah with awesome joy! In doing so, in his greatness he saw that there is never ever a reason to quit. The chassidim describe how he cried out and lengthened the words “Don’t give up”, like he was charging every Jew eternally never to despair!

This story happened more than 200 years ago in a small house in the Ukraine but it couldn’t be more true and relevant today. We have so much potential. Hashem, the Jewish people and the world at large needs us. Let’s not write ourselves off because of some past difficulties. We have too much to offer! “Gevalt! Don’t give up”!